How to write to Pope Francis 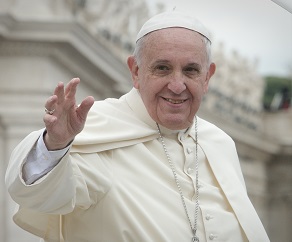 All those wishing to write to the Pope, may send their letters to the following address:

Pope Francis does not have a public email address, the only way to contact His Holiness is through the traditional mail service.
Thousands of messages, letters and parcels are daily received by Pope Francis from all over the world.

The Person in charge of the Pope’s correspondence is Mon. Giuliano Gallorini who together with Sister Anna and two laic ladies in the Palazzo Apostolico, deal with all the correspondence sent to Pope Bergoglio.

As Mons. Gallorini explains, the first task would be that of actually dividing the letters according to the language, then to open and to read the contents of each. Each and every letter will receive a reply whilst the most complex ones concerning cases of conscience will directly be entrusted to the Pope’s secretaries to enable Pope Francis to reply to them personally or rather to enable Him give indications on how the letter should be replied to.

Hence, not all letters sent to Pope Francis will be personally dealt with by Him, but rather His Correspondence Office shall take on to share the sufferance of every person that writes to Pope Francis and whom shall receive a reply in the style and wording of the Pope Himself according to the seriousness of the case.

NB: Any comments expressed on the underlying article will not be addressed to the Pope directly; the only way to contact His Holiness is in accordance to the afore-mentioned instructions .